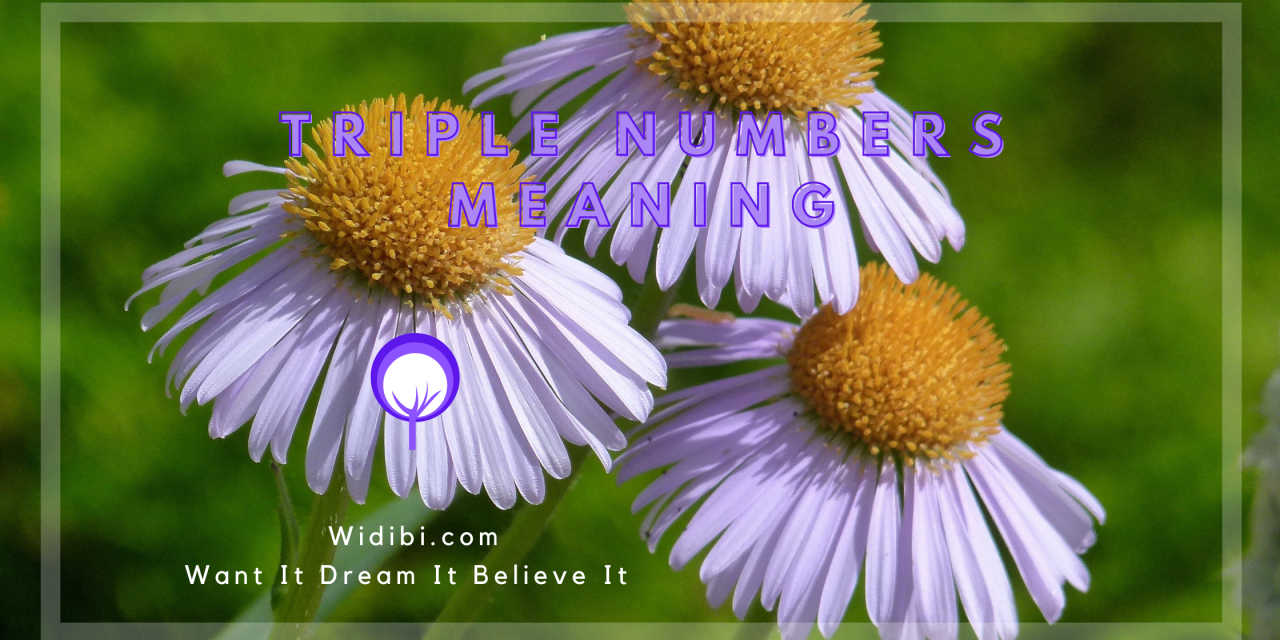 One effect of using the law of attraction as part of your daily life is that you’ll start to notice patterns. One of my favourites, which I first encountered in The Secret, is that every time you start to lose focus or think negatively, something happens to snap you out of it. It could be a car alarm going off, a knock at the door or basically anything that reminds you to get back on track. While that doesn’t happen for everyone, something you will find being increasingly common is repeated numbers.

Sadly, this isn’t the universe trying to tell you the winning lottery numbers for the next draw. Given that you’ll mostly find these repeating numbers in sets of three, they wouldn’t work anyway as most lottos around the world don’t go that high. However, what you should know about the triple numbers meaning is that they do indeed indicate the universe attempting to send you a message.

The universe is persistent – that’s how it manages to organise the world around you in such a way that everything seemingly falls into place. Similarly, it will keep on trying to get its message through and that’s a good thing. If it’s never happened to you before, you might not be predisposed to looking out for these patterns. Even if you’ve started to notice some repetition, you might not be aware of how to make sense of what they’re trying to get you to do.

A colleague here at Widibi recently wrote on the significance of the number 333 and that goes in-depth on how that particular triple numbers meaning sees the universe attempting to promote creativity and authenticity.

It’s the perfect example of what seeing repeated patterns of numbers can do for you. In essence, the universe does all it can to make things happen for you, but it’s never afraid of asking for a helping hand when it feels you yourself can speed along the process.

Where Would I See Repeating Numbers?

I’m actually really glad that you’ve taken the time to look into the significance of repeating numbers, as they’re so easy to dismiss when you’re not actively looking for them.

Where you see them largely depends on what you do each day. If you spend most of your time at home, as I do, then you’re most likely to identify these patterns on clocks, in books and magazines or on television.

Conversely, if you spend a lot of your time on the road or otherwise out and about, you may encounter them on billboards, in conversation with others or just about anywhere that three matching digits can realistically appear.

How Can I Make the Most of the Triple Numbers Meaning?

If you find yourself spotting numbers and stopping and wondering whether they have any significance to you, then you’re well on your way to making them work for you. Three matching numbers, such as the 333 example mentioned above, aren’t the only numbers you’ll see for obvious reasons. Right now, for example, I can look at the clock in the bottom corner of my screen and see that it’s 12.19. This number, at least for the purpose of this article, has no significant meaning.

However, if you find yourself seeing matching numbers more often than you might expect, like 111, 222 or 333, then there’s every chance that the universe wants to communicate.

You can find out more about what these numbers mean in the context of the law of attraction here on the site. I won’t go into significant detail here simply because I want your focus at this time to be on identifying patterns and knowing what to look out for. If you witness such a pattern developing, you can then return here to the site and find out more about its significance and what you should do to not only acknowledge the message, but to act on it too.

If you find yourself repeatedly seeing three matching digits as you go about your daily life, then you should consider it as whatever power manifests the law of attraction for you attempting to send you a message. Once again, I don’t want to focus too heavily on the meaning at this point, as you can always come back later to find out more. For now, I’d rather you spent your time making notes of the signals as they happen.

Finally, whatever you do, don’t get carried away! Seeing repeating numbers once isn’t a pattern. Just because you happened to glance at the clock at 3.33 doesn’t mean that the universe is demanding more from you in terms of creativity! Then again, these messages are rarely negative and implementing the universe’s suggestions in your routine could be a good idea anyway, even if you do so under your own steam.