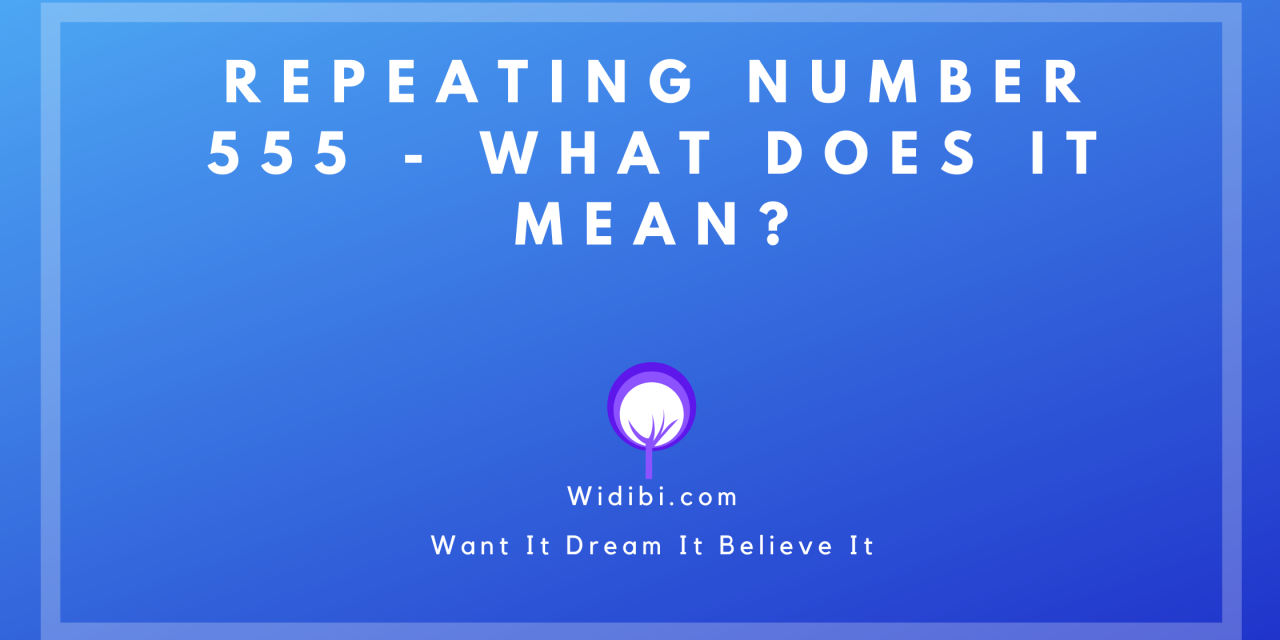 If you find yourself repeatedly seeing the number 555 as you go about your daily business, you’re encountering an Angel Number which, in this case, indicates that you should expect major changes to your life and outlook.

I have to admit to not having always assigned repeating numbers they deserve in the law of attraction. Technically, they’re part of numerology, an entirely different discipline. However, as signs from the universe, they’re worth reading up on by anyone that seeks to undertake a comprehensive understanding of the practice.

This comes down to the concept of the universe and angels. When we manifest, write down affirmations and show gratitude to an invisible entity, the majority of us do so to the angels and the universe. My preference is for the latter but, in spite of different names, there’s nothing to suggest that we’re not communicating with the same ‘entity’.

Repeating numbers like 555 slot in nicely in the theory due to the fact that they provide us with an opportunity to receive messages from our chosen entity. I’m yet to hear of any instances of the universe communicating verbally with even the most experienced law of attraction practitioners, so it’s instead up to us to open ourselves up to the signs and to interpret them as they’re intended.

My view is that the universe works constantly to arrange circumstances around you to successfully edge you closer to your goals, whatever they may be. They bring about real change as they help out law of attraction practitioners and their potential influence over the world you create is limitless. This gives them ample opportunity to ‘coincidentally’ display numbers like 555 regularly enough for you to spot the pattern. Incidentally, I don’t believe in coincidences, but I do put such occurrences down to synchronicity.

Think about where you might see the number 555, and you’ll quickly realise that the angels aren’t short of opportunities. You might find yourself checking your watch over several days and seemingly always glancing at exactly 5.55. You might go into a shop for a couple of items and find your total comes to 5.55. You can then see the repeating number 555 on phone numbers, license plates and a vast array of other areas.

The important thing is to ensure that you keep your mind open and ready to receive such messages. The good news with 555 specifically is that it represents a pat on the back from the universe, combined with the advanced knowledge that change is afoot. If you don’t actively notice the message, the chances are that it will happen anyway, whether you do anything or not. However, it’s a good idea to get yourself into the mindset of keeping an eye out for these patterns, as some of the other Angel Numbers you might encounter will suggest changes on your part, encouraging you to take action to make the universe’s job easier.

What Repeated Sightings of 555 Means

The key word to have in mind if you find yourself regularly spotting the number 555 is change. There’s more good news here, as the universe is unequivocally on your side, and so you can further interpret its meaning as being a change for the better. If you practice the law of attraction, there’s every chance you have something in mind that you’d like to change and achieve. It might be in a journal, or it could be on a vision board. Indeed, there are hundreds of ways to let the universe know what you want to happen.

Seeing the number 555 more often than usual indicates that something is happening to get you closer to that goal. There’s every chance that the change you can expect is coming soon, and it will have a direct impact on your ability to reach those goals – positively, of course.

The slight downside to this method of communication is that there are rarely any further details. However, I try to interpret the meaning around what’s happening when I witness the messages.

Let’s say you do long shifts in your current job, and one of your goals is to find something new to do. You might find yourself waking up at 5.55 each morning and instinctively checking the clock – which is incidentally the perfect time to get up and get ready. Your job finishes at 6 pm, and you see yourself looking at the clock at precisely 5.55 each evening. You then see further instances of 555 on the drive to and from work. These sightings are clustered in a way that’s relevant to something in your life, and it makes sense to interpret this as a change coming to the world of work around you.

Repeating Number 555 – What Does It Mean? – In Summary

If you’re constantly being confronted with the repeating number 555, then you can expect something significant to change in your life. It could involve work, relationships or just about anything else, and if you’ve been using the law of attraction to make your wants and ambitions clear to the universe, it will almost certainly have something to do with getting you closer towards that goal. That might be a new job, new friends, different living arrangements or anything else that gets you closer to the ultimate goal. If you’re particularly close to success, it might even be a signal that the ultimate goal is about to come to pass.

Stay open to these patterns, and be prepared to put two and two together in identifying them. They appear to everyone, but it’s those that pay the closest attention that reap the benefits. It’s not massively essential with the number 555, as the message is about something that will happen anyway. However, there are numerous repeating numbers that serve the same purpose, but with different messages, some of which suggest taking action to make life easier for the universe to deliver.

So, with the number 555, you’re rarely under any pressure! However, if you’ve started to spot a pattern and never encountered them before, it’s an ideal opportunity to get acquainted with opening yourself up to further messages and taking action accordingly.