The Meaning of 777 in the Law of Attraction 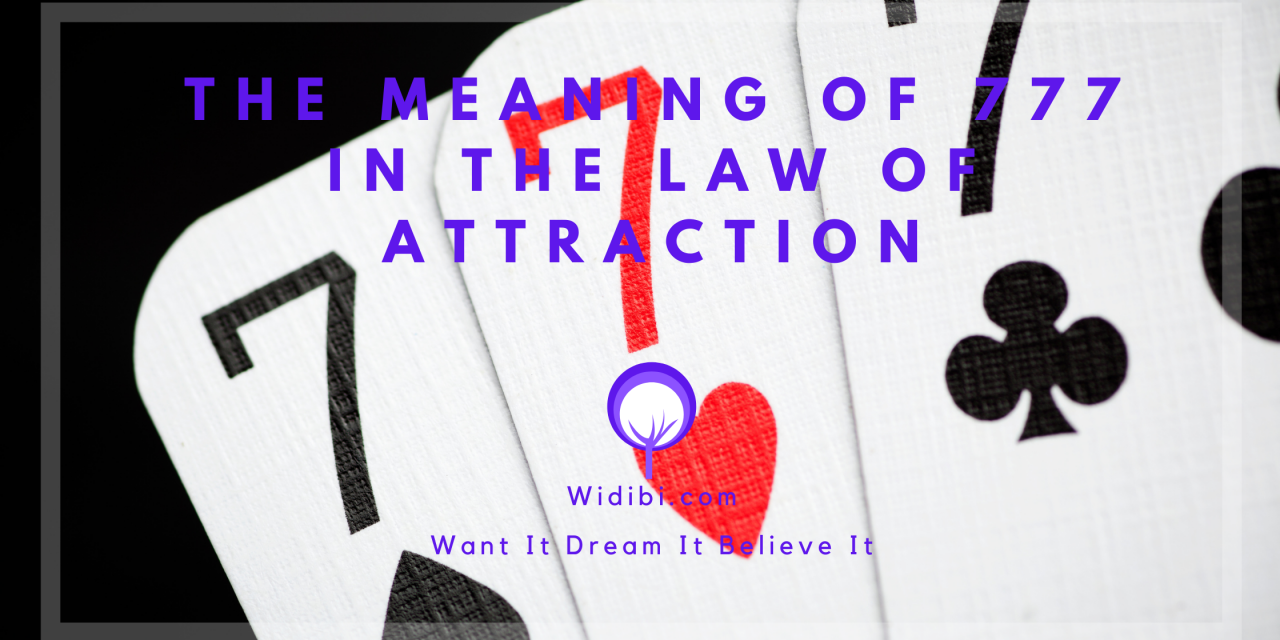 If you practice the law of attraction in any way and notice yourself seeing the number 777 on a regular basis, it means you are on the verge of uncovering a secret or solving a problem.

As with most triple numbers and their roles in the law of attraction, seeing the same number several times, and doing so on a regular basis, hints at a more powerful, concentrated version of the individual numbers. So, to fully explore the synchronicities of the number 777, we begin with the number 7 on its own.

The Significance of 7 in the Law of Attraction

Seven is widely considered among the most potent spiritual numbers. In western cultures, at least, it is the most common individual ‘lucky’ number, playing a similar role as eight in Eastern culture.

However, luck is not exactly a significant concept in the law of attraction, which relies more on purpose and direct energy rather than leaving things to chance. Rather than being lucky, the number 7 instead represents spiritual evolution and enlightenment.

In short, it is a number that signifies significant learning through a more substantial, closer relationship with the universe. This could mean learning about something in the physical realm or expanding knowledge to the point that someone may take on different spiritual talents. The number represents new abilities, so it is a great sign to see for anyone seeking to perfect new talents, whether as part of their day-to-day life or in communication with the universe.

Angel numbers appear as synchronicities to those that practice the law of attraction, often as a message from the universe. The angels do not communicate verbally or in a written form. For those that practice the LoA but rarely get involved with anything more spiritual, it is considered the most effective means of taking messages from the universe.

In the case of 777, it is a sign of encouragement from the universe to stick to the path of knowledge you seek. The angels are passing on the information that you are following the correct course to gain the understanding you seek.

More spiritual individuals often consider it as being an indication that they are close to spiritual enlightenment, which some regard as the ultimate achievement. However, for the law of attraction alone, it could mean all sorts of things.

777 Encourages You to Keep Learning

The specific interpretation of the number comes down to what you seek to achieve.

I have a friend who has been practising the law of attraction since before he left school. He had a university degree on his vision board, his favoured means of manifesting. He didn’t have a natural academic aptitude and found university life stressful, to the point that, as he approached his final year, he seriously considered giving up and dropping out.

Unsure of how to proceed, he went through the motions in the summer before he was due to commence that final year. He got a house share with some friends from the university. The house number was 777.

He went on holiday and stayed somewhere that was around 15 minutes from the party capital of the area in which he stayed. He was a student, so that was incredibly important. The number of the bus that took him from his accommodation to party central? You guessed it.

This was the universe giving him signs to commit to his learning. He was stubborn and strong-minded. Friends and family were incapable of aiding the decision of whether to stick with university or drop out. However, he believed enough in the law of attraction and synchronicities to understand the importance of completing his studies.

For those wondering, he completed those studies with the best possible grade and continued into further education, buoyed by a renewed appreciation of the importance of education.

Some believe that the number 777 goes beyond the earthly realm and encourages those that see the number often to work on unlocking their remarkable potential. I do not consider these abilities as being directly related to the law of attraction, but they are worth noting here as I’m sure that some reading this article will be more spiritual than others.

These ‘powers’ often take the form of healing abilities or some kind of psychic powers. It is not for me to suggest that people should believe in mediums, psychics and others in the same line of work. However, if, on a personal level, you wish to explore those kinds of abilities, regularly seeing the number 777 should be all the encouragement you need to see if you can get in touch with those talents.

Beyond this, 777 also serves as encouragement to share any gifts you discover with others. Follow the path, learn and then improve the lives of those around you with the talents you have, and you can expect to be rewarded further.

777 is one of the better repeating numbers to see often, as it rarely requires any significant change to your approach or lifestyle. Some numerical synchronicities serve as warnings to take a different approach or direction in acquiring what you want from the law of attraction. In most cases, 777 is the encouragement to continue doing what you’re doing.

If you’re already in education or a learning phase, keep going. If you’re thinking of entering education or retraining, it’s a sign that it’s a fantastic idea.

If you’re undertaking some personal development rather than structured education, the number 777 is an indication from the universe that you are on the correct path. You might have a new hobby, and you’re excited to learn everything you can from books and the internet. Keep at it. You may have come into contact with a new mentor – learn all you can from them and value their insight.

The need for change may stem from not learning enough. The universe may be working on what you write down as affirmations or place on your vision board. It may be looking to arrange things so you can earn the wage you desire or get the job of your dreams. It has acknowledged that this is either impossible or will take too long without more knowledge or an additional qualification.

In this case, it’s a sign that you need to refocus your daily efforts. Stop and think about what education you might require to achieve your goals. Feel free to request further signs and guidance, but make a point of making learning and enlightenment a priority as you’ve been directed that they are the keys to unlock further development towards your larger goals.

The Meaning of 777 in the Law of Attraction – In Summary

If you see the number 777 repeatedly enough that it sticks in your mind and you practice the law of attraction, then make education, learning and enlightenment a priority. It’s either a message from the universe that you’re on the right track with what you’re doing in terms of knowledge or a reminder to make additional learning a part of your personal development.

It would help if you also didn’t forget that when you receive a synchronicity in the form of repeating numbers when practising the law of attraction, it’s a sign that the universe is listening. The very fact that it is arranging things around you to send this message should represent all the confidence you need that your manifestations and goals are well on their way to being delivered. Can You Share What You’re Manifesting? 5 Awesome Reasons to Manifest with Others